Ann Williams was born in 1807 in Llanfeugan, Breconshire Wales to William Williams and his wife Dina. She was baptized on May 8th 1807 in the Aber Independent Congregational Chapel. Ann’s first husband was Edward Rowlands, son of Rowland Jones Rowland and his wife Jane. He was born in Dolgelly Merionethshire North Wales in 1806 and baptized in the Old Congregational Chapel on August 14th 1806.

It isn’t clear when Ann and Edward married but their first child William was born in 1831, followed by Catherine born in 1833 and Edward Jr in 1834. The family appeared to have changed their religious affiliation as Edward was baptized in the Methodist church. Shortly thereafter Edward died and Ann remarried. Her second husband was Richard Morris.

Richard Morris was born in North Wales on August 19th 1808. The exact town of his birth and his parents names are unknown as is the date of Ann and Richard’s marriage. According to the 1841 Wales census the family was living in Llanenddwyn Merionethshire. The family had grown to include Evan, born in 1837, Sarah born in 1839 and Owen born in 1841. Richard was employed as a Sadler, Ann an agricultural labourer.

According to Ann’s obituary the family sailed for Canada in 1842. Included in the family group was Ann’s seventh child Bennett, born in 1841. By the time the 1852 census was taken the family was living in Sharon. Six more children were born to the family in Canada: Jane born in 1843, Anna born in 1845, Hannah born in 1847, John born in 1849, Thomas born in 1851 and Alice born in 1853. Richard continued to work as a sadler and harness maker.

Ann died on April 28th 1876 at the age of 68 years, 11 months and 10 days. The duration of illness was given as four months though the cause of death was not given. The obituary from the Newmarket Era notes that she was a kind neighbour and faithful wife and mother

She left behind her husband and 11 children (she was predeceased by two of her children. Richard moved in with his son Thomas after Ann’s death. 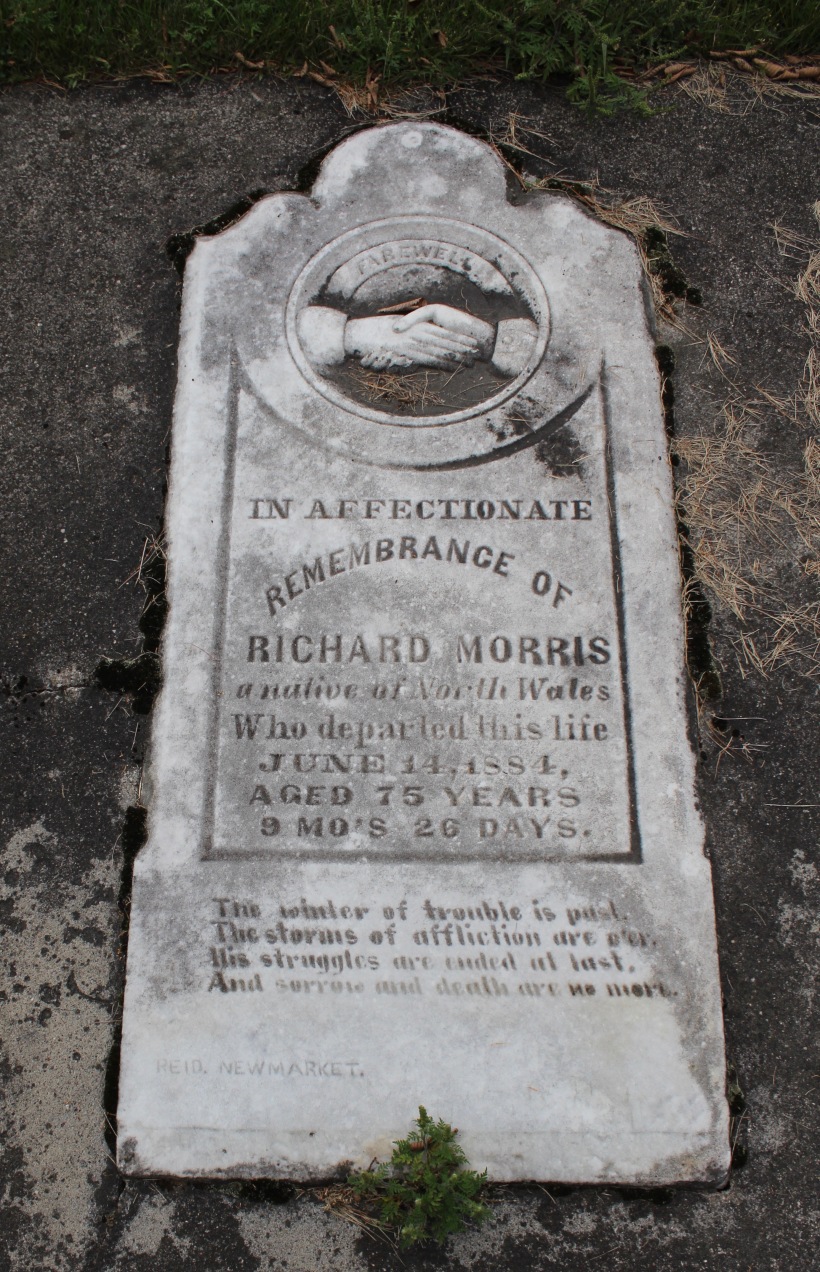 Ann and Richard had respectable lifespans but several of their children died early:

Edward Rowland was born on 14 December 1834 in Merionethshire Wales, the third child of Ann Williams and her first husband Edward Rowland. Edward joined his parents and siblings on the trip to Canada in 1842 settling in East Gwillimbury. Not a lot is known about his short life. The inscription on his tombstone tells the sad story of his demise: he drowned on Sunday morning June 27 1847. His step-father erected the tombstone.

Evan Morris was born in March 26th1837 in Golgelly, Merionethshire Wales, the first born child of Ann Williams and Richard Morris. He emigrated to East Gwillimbury with his family in 1842. There he met and married Lovina Leppard on 20 October 1858. The couple settled in East Gwillimbury where Evan farmed and worked as a carpenter next to other Leppards, relatives of Lovina. Evan and Lovina raised six children: Richard, Jane, Annie, Rachel, John William and Ellen. Religion was listed as Methodist or Christian, though Lovina was listed as a member of the Children of Peace in the 1852 census before her marriage. Evan and Lovina had been married 38 years and were not doubt looking forward to growing old together when tragedy struck – Evan died on 28 May 1897 at the age of 60 years 2 months and 2 days after a sudden fall while helping build a barn. The story is told in the Newmarket Era of June 4 1897:

He was buried in the Burying Ground on 30 May 1897. Lovina lived another 25 years dying on May 7th1922 of exhaustion resulting from bronchitis with emphysema. She was buried beside her husband.

Bennett Morris was born on 13 December 1841 in Llanenddwyn Merionethshire Wales, the fourth child of Ann Williams and Richard Morris, and the last to be born in Wales. He crossed the ocean as an infant in 1842 and settled in East Gwillimbury with his family. Perhaps the journey or the harsh Canadian weather did not agree with Bennett. He contracted tuberculosis and died of consumption at the age of 28 years, 10 months and 7 days on August 28 1870 and is buried beside his parents.

Alice Morris was born on 24 September 1853 in Sharon, the youngest child of Ann Williams and Richard Morris. Tragically, she was the second Morris child to contract consumption and die young. She passed away on 3 June 1880 and was buried near her siblings and parents.

John Peregrine Morris was born on April 5 1848 in Sharon, the 8thchild of Ann Williams and Richard Morris. He married Rachel Kirton of King on 26 Sept 1877. Rachel was born on 24 May 1854 in East Gwillimbury. John worked as a carpenter and the couple raised three daughters: Frances, Emma and Ethel. Their fourth child, a son Seth was born on November 1st1887. I could not find a record of her death but it appears that Rachel died early in 1888, likely due to complications from childbirth. She was 33 years old. Sadly John died on 12 December 1888 at the age of 40 years, 8 months and 7 days due to inflammation of the lungs, 6 days duration. This left four young orphans aged 8, 7, 4, and I. The children were scattered and were taken in by various relatives. I could not find an obituary for either Morris. They are buried side by side in the Burying Ground.