Murdoch McLeod was born 6 October 1765 in the Highlands of Scotland to Daniel and Cathryn McLeod. As a young man he emigrated to North America and by the 1780s was settled in Bucks County Pennsylvania. Murdoch was not born into the Quaker religion – he was likely raised in the Church of Scotland. However, he soon met and married Rachel Terry, a Quaker.

Rachel was born 9 February 1769 to David Terry and Grace Davis. Rachel was no stranger to the problems involved in marrying outside the Quaker faith – her father David Terry was disowned for marrying her mother Grace Davis who was not a Quaker. David appears to have rejoined the faith and Rachel was raised as a Quaker. It is not clear when they married but by 1790 the first of their twelve children were born.

The atmosphere in Pennsylvania was not as welcoming to Quakers as had been hoped; Murdoch and Rachel joined a group of family members who decided to take their chances in Canada. In about 1806 the McLeods arrived in York County with several of Rachel’s siblings and their families.

On 13 April 1807 Murdoch petitioned Lieutenant Governor Sir Francis Gore for land. He wrote that he and his family (a wife and eight children) had arrived ten months ago from Pennsylvania. He was in possession of 500 pounds and had “made the affirmation of allegiance and is desirous to occupy and improve a vacant lot of land of the crown”.   A grant of 200 acres was made – Lot 72 Concession 1 on the West side of Yonge Street, King Township.

Murdoch and his family began attending meetings at the Yonge Street meeting house in Newmarket, joining fellow American immigrants Ebenezer Doan, Israel Lundy and others listed in an undated register of Friends.

However, by 1812 Murdoch had joined the Children of Peace. The Yonge Street Monthly Meeting book made the following note on December 7th1812:

Follow up on January 14th1813 noted that the Committee met with Murdick but that he did not make satisfaction to them. Testimony was to made against him at the following meeting and his departure from the Quakers was formalized.

In July of 1820 Murdoch purchased Lot 11 Concession 2 in East Gwillimbury and moved closer to the Sharon Temple. Murdoch and Rachel remained members of the Children of Peace for the balance of their lives. Most of their children prospered and married. Some remained in Upper Canada, some returned to the United States.  The McLeod family was involved in the 1837 Upper Canada Rebellion along with other members of the Children of Peace. Tragedy struck the McLeods as a result – their son Alexander was convicted of treason and received a sentence of life in prison. He was convicted on 18 July 1838 and transported to Van Diemen’s Land (Tasmania) on 16 March 1839. Sadly, the ship’s records noted that he died on August 3rd1839.

In his will written on March 13th1847 Murdoch instructed that “I give and grant into the hands of the Trustees of the Charity Fund belonging to the society of the Children of Peace established in Sharon in the said Township of East Gwillimbury the sum of fifty pounds for the benefit of the Poor of that society” and also noted “I direct that my body be decently intered in the Burying ground situated on the northwest corner of Lot 6 in the third concession of said Township of East Gwillimbury”. Upon his death on June 28th1847 Murdoch was buried in the Sharon Burial Ground as per his instructions. Rachel died in December of the following year and is buried beside her husband. 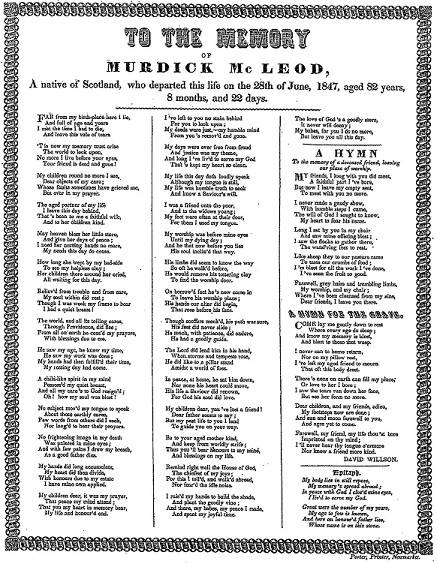