Matthew Lilley was born on November 21st1799 in the village of North Collingham, Nottingham, England. He was the middle child of five children born to Matthew Lilley Sr and Mary Coupland. Matthew in fact was the third in a line of Matthew Lilleys with his grandfather also having the same name. The Lilley family was well established in the Lincoln/Nottingham area and can be traced back well into the 17thcentury.

Eleanor Bescoby was born on April 12th1809 in the village of Cranwell, Lincolnshire, England. The Bescobys had a long history in this village and records were located dating back to the early 1600s. Eleanor was 3rdof 8 children born to William Bescoby and Bridget Foster.

Matthew and Eleanor were married on July 8th1828 in the parish of Silk Willoughby, Lincolnshire. Matthew was 28 and Eleanor 19.

The couple settled in Cranwell and in 1829 their first child Mary was born. She was followed by eight brothers and sisters: William (1830), John (1832), Robert (1835), Ann (1836), Eliza (1838), George Matthew (1841), Theophilus George (1843) and Charles (1844). The family was found in the 1841 census in Cranwell with Matthew’s employment listed as agricultural labourer. Matthew is listed in the pollbook for the 1841 British General Election where he is listed as a freeholder and cast his vote for Conservative candidates Lord Charles Worsley and Robert Adam Christopher (the riding of North Lincolnshire returned two Members of Parliament.

The Lilley family appeared to be a respectable upstanding family with deep roots in their Lincoln home. However, they would soon be on their way to Canada. A catalyst may have been the death of their eldest daughter at the age of 15 in 1844. She was buried in the churchyard at St. Andrew’s Church on December 29th1844. By the next year they were in Canada West heading for East Gwillimbury. No passenger lists could be located but this record from the Emigration Service Fund lists a Martin Lilley, wife and seven children seeking assistance on July 9th1845 to travel from Toronto to East Gwillimbury. They are listed as “indigent” – it appears that the cost of transporting 9 people from England to Canada had depleted the family’s savings. 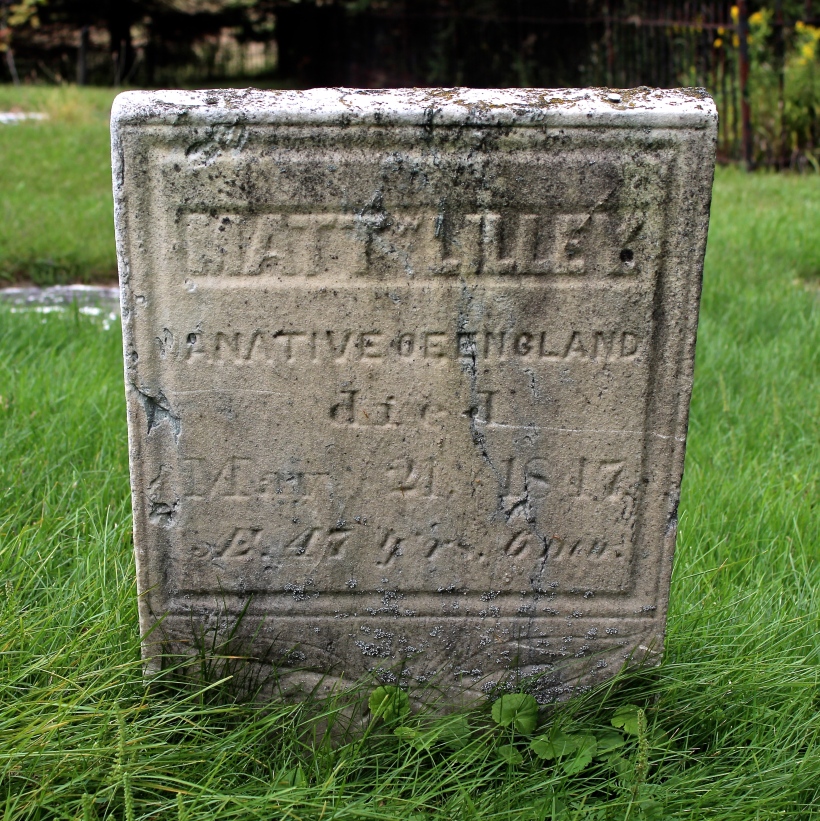 The poem on his headstone is no longer visible

Come to my grave and breathe a sigh

There father in the grave doth lie

Eleanor remained in East Gwillimbury with her seven remaining children. The family is listed on the 1851 Census.

Sadly, Eleanor also died prematurely passing away on July 31st1859 at the age of 50. She is buried beside her husband in the Burying Ground.